The land of many cultures and rich traditions, India is a visual delight for the visitors. Each of its diverse regions is the product of its deep-rooted past. This 9-day long voyage entails a round trip to Kolkata via Kalna, Chandernagore and other prominent cities. Our luxurious abode will add more stars to your experience, leaving you with fond memories.


The land of diversity, India is a refreshing spectacle for those who are seeking to dive into spirituality. This 8-day long voyage from Kolkata to Kalna involves familiarizing you with India’s rich heritage. Our luxurious abode will enhance this fascinating experience and leave you with a treasure of pleasant memories to cherish. 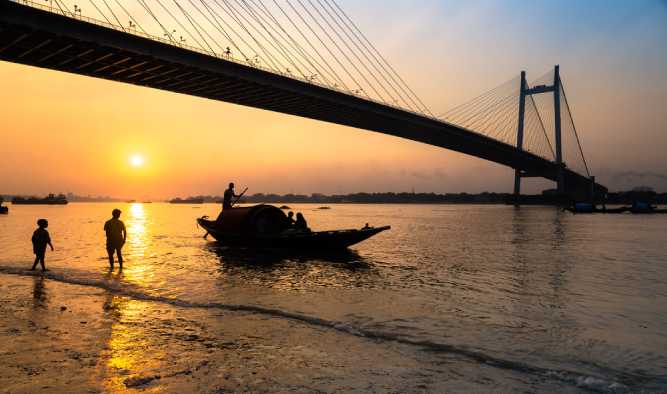 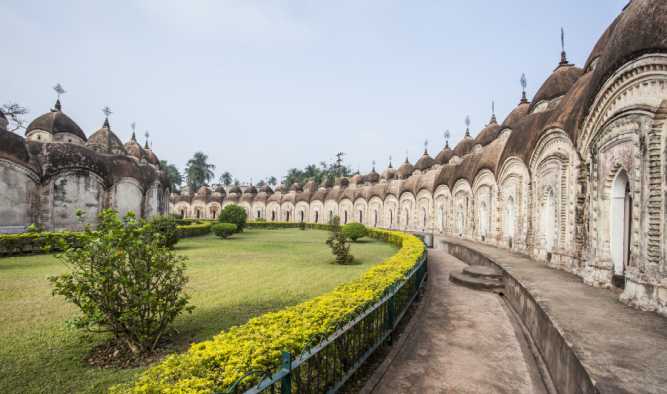 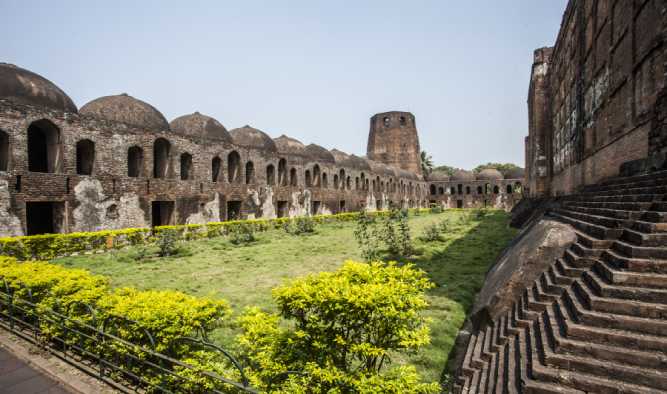 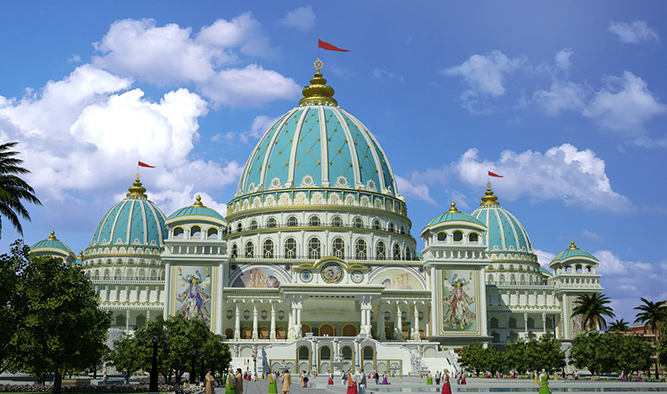 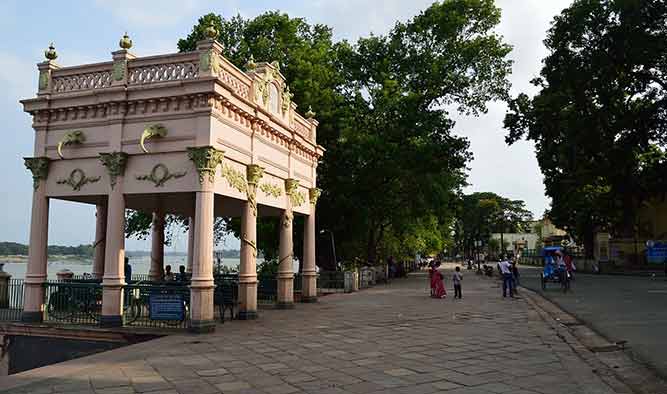 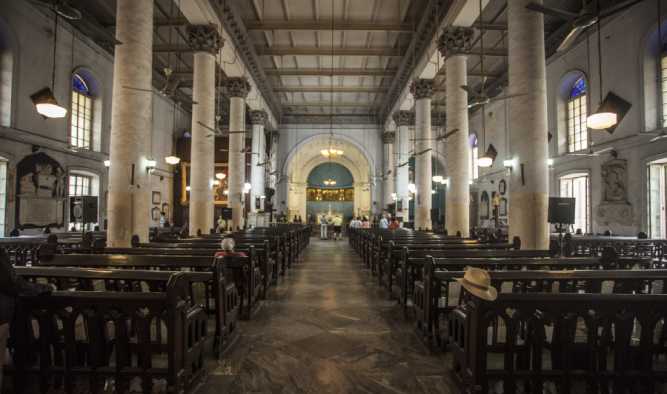 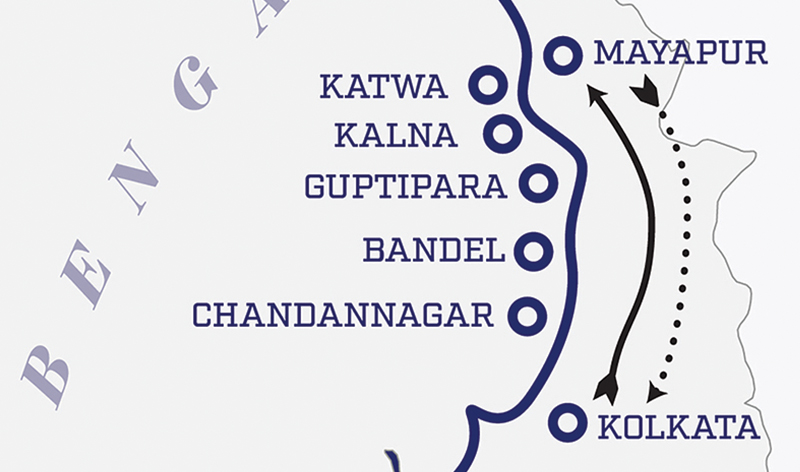 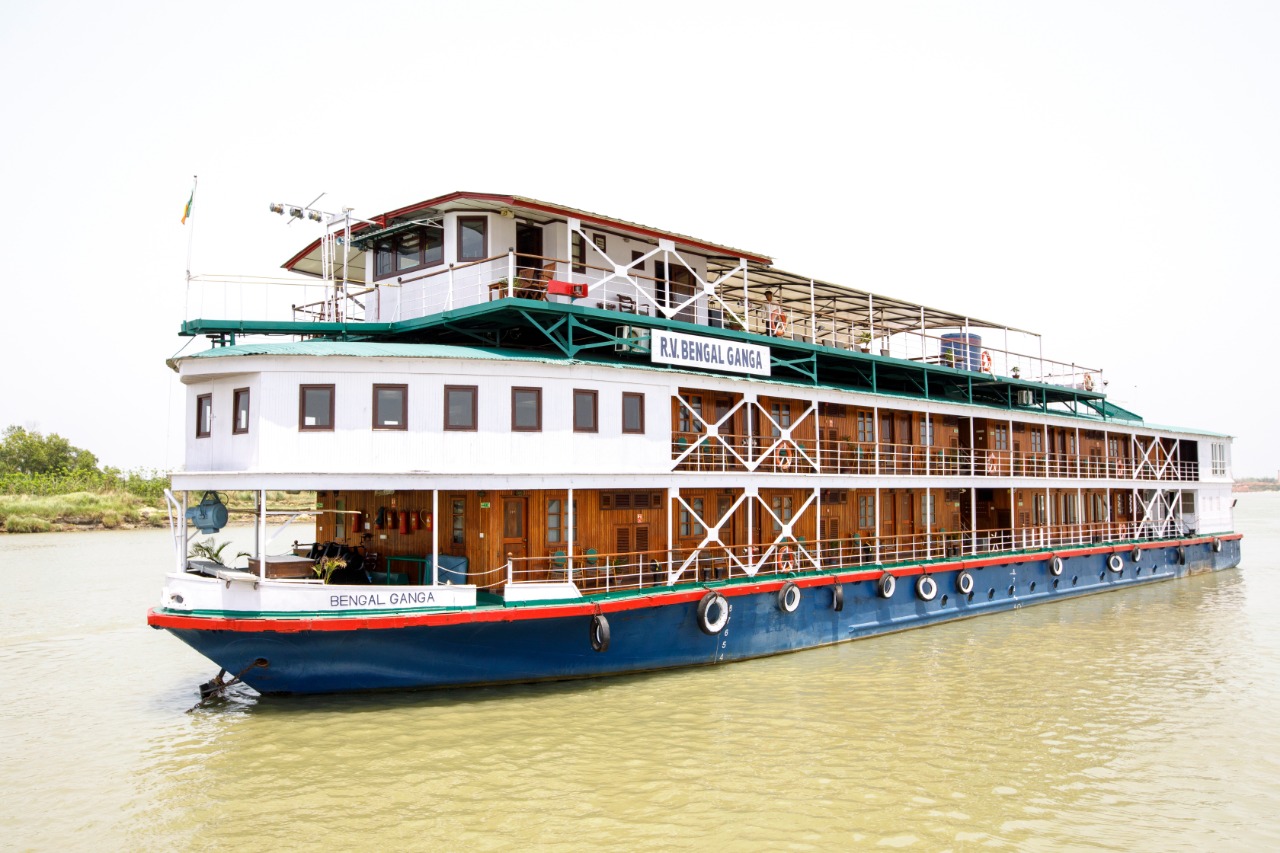 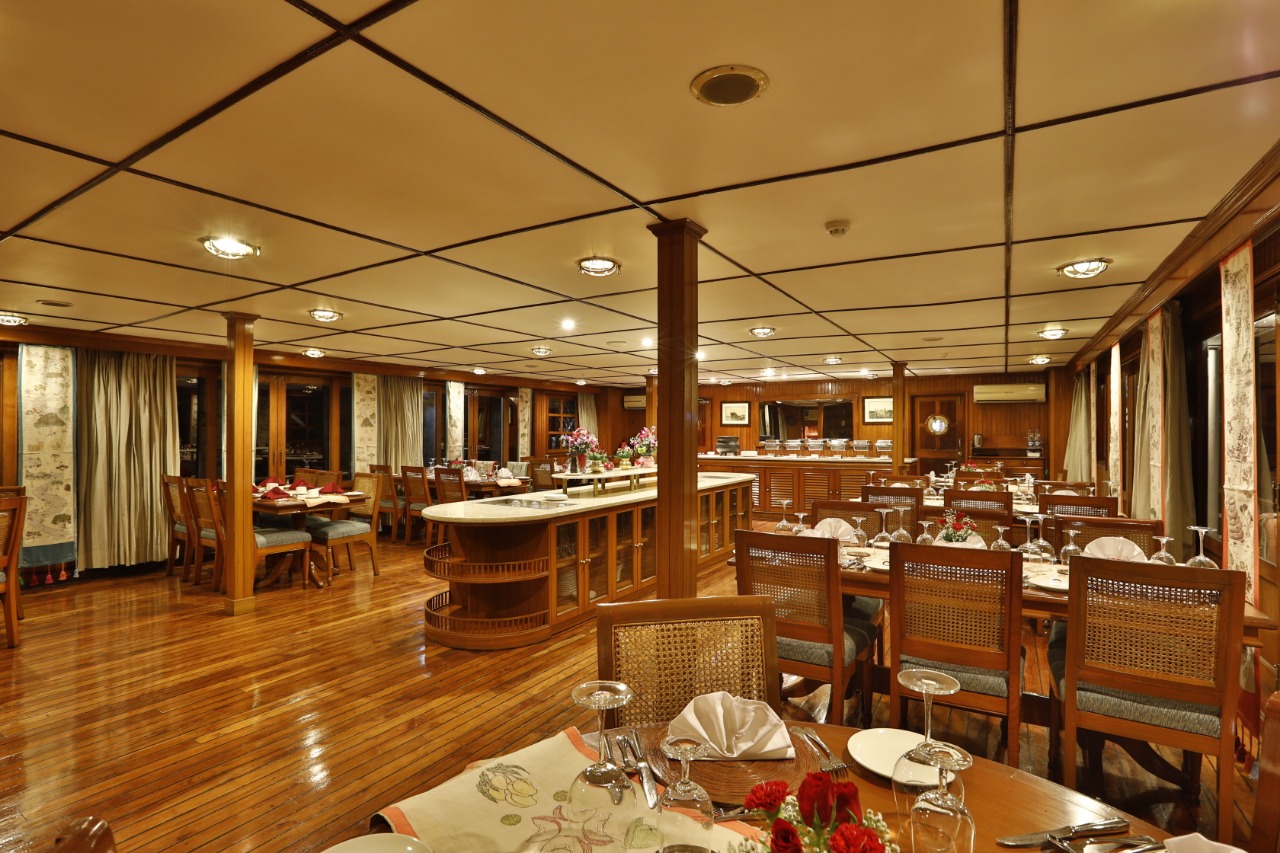 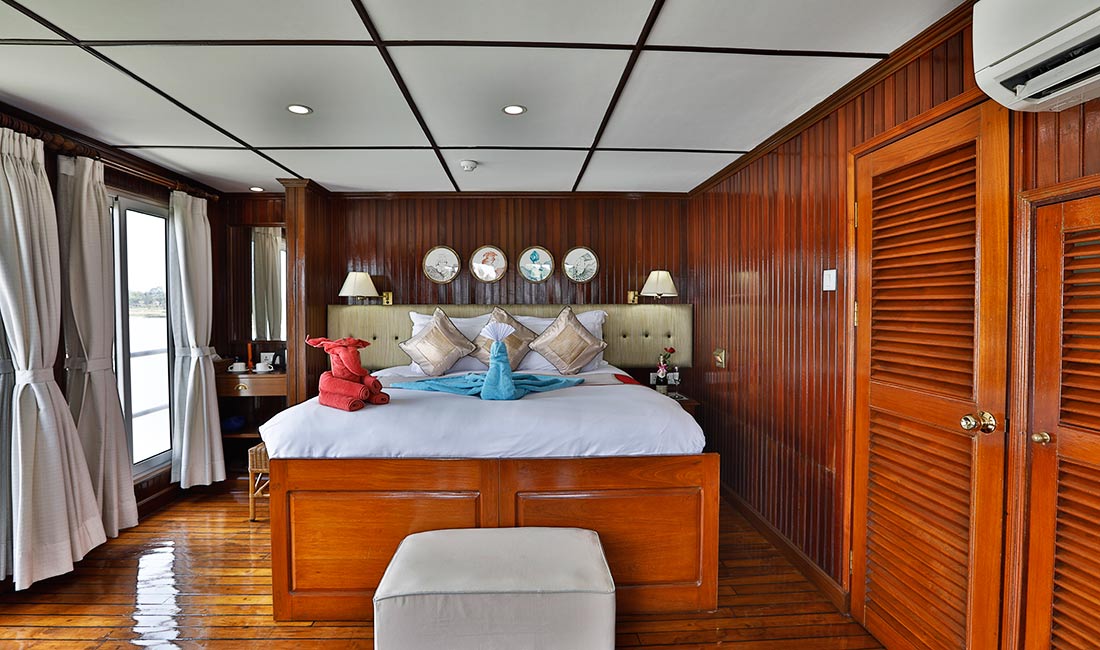 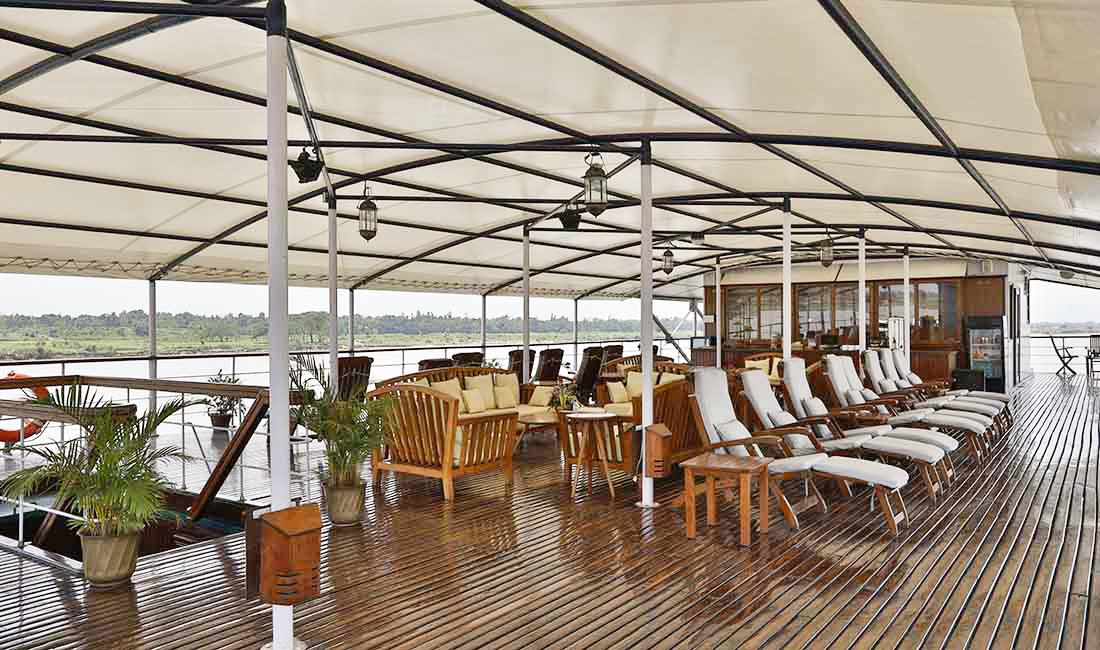 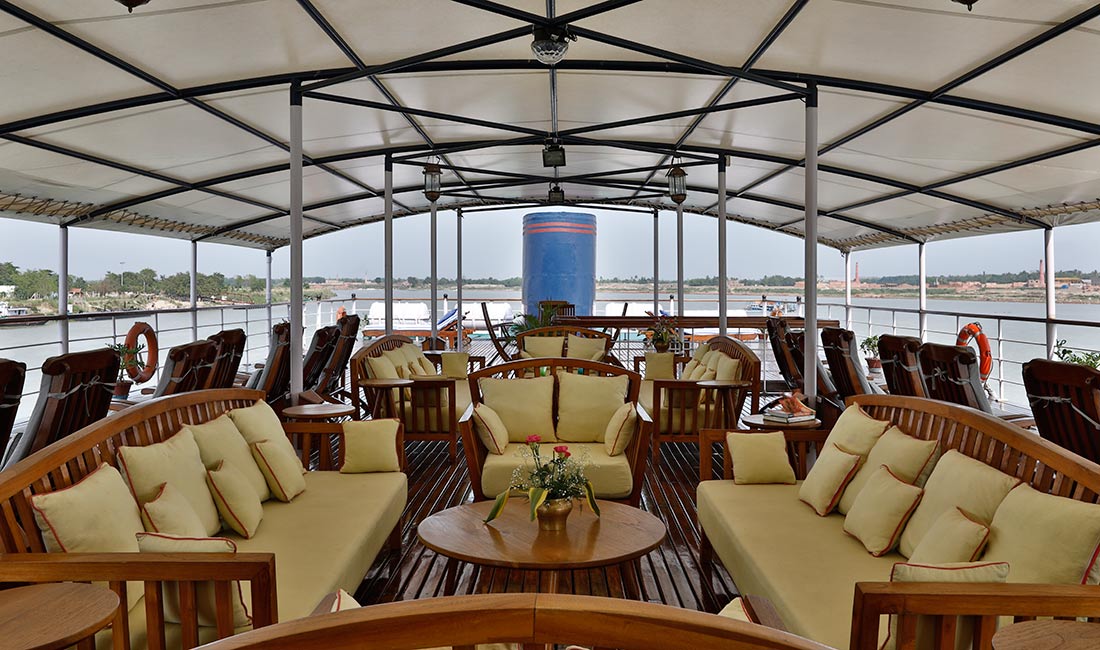 Once you arrive in Kolkata and board the ship, you will be welcomed with a delicious lunch. We then explore the numerous areas, which were inhabited by the European settlers in the colonial era. This will be followed by our arrival in Kalna.

We start the day with a rickshaw ride through the streets of Kalna. We then take you to the enchanting Rajbari Temple Complex in Kalna. It houses Nabakailas Temple inspired by the architecture of mosques and Pratapeshwar Temple notable for its terra cotta plaques. After this, we set off to Matiari.

Our day starts with a visit to the village of Matiari. It is known for its work in brass and copper. The loud clunking of metal welcomes you on the arrival. You can buy some artifacts to take back home while strolling through the village. After this, we cruise towards Murshidabad.

The day begins with a horse ride to Katra Mosque, which was built by the city’s first Nawab, Murshid Quli Khan. We then visit Hazarduari Palace, built during the reign of Nawab Nazim Humayun Jah. It was built in the Greek “Doric” style and is replete with colonial era antiques, artwork and manuscripts.

The birthplace of Sri Chaitanya Mahaprabhu, an incarnation of Lord Krishna, Mayapur is the headquarters of ISKCON Temple. This massive temple was funded by Alfred B. Ford, the great grandson of car-maker, Henry Ford. After interacting with other devotees, we walk through the pilgrim’s bazaar.

We sail to the famous French colony of Chandernagore in the morning. A trading post was set up here with the permission from Ibrahim Khan. After visiting the governor's residence and the other buildings in the promenade, we visit Sacred Heart Church. Upon returning, we move to Kolkata.

The day begins with a panoramic tour of Kolkata. We visit the city’s major landmarks such as Writer's Building, Governor's House, Reserve Bank of India and Dalhousie Square. We then head to St. John's Church, Kolkata’s oldest Anglican Church, and Victoria Memorial Museum, which hosts India’s largest collection of British artifacts. We then return to the ship where you can enjoy a cultural performance.

After breakfast, guests depart from the ship and leave for their next flight or depart to their onward destination.

Upon arrival in Kolkata, guests will be transferred to the ship. This will be followed by lunch and a cultural performance in the evening.

The day begins with a Panoramic Tour of Kolkata, exploring the city’s major tourist landmarks such as Writer's Building, High Court, Raj Bhawan and Council House. Next, we visit Kolkata’s oldest Church, St. John's Church and Victoria Memorial Museum, which has relicts of colonial era. We then head to Chandernagore, which has many European settlements.

We visit Chandernagore, the colony established by the French in 1673. A trading post was built here after Ibrahim Khan, the then Nawab of Bengal conceded. This will entail a visit to the former French governor's residence and other buildings along the promenade. We then head to Sacred Heart Church and after returning, we proceed to Mayapur.

The birthplace of Sri Chaitanya Mahaprabhu (1486) and the incarnation of Lord Krishna, Mayapur is the headquarters of ISKCON Temple. It is an impressive temple funded by Alfred B. Ford, the grandson of the man who introduced assembly-line production, Henry Ford. After meeting Lord Krishna’s disciples and visiting the pilgrim’s bazaar, we board the ship and sail towards Matiari.

In the village of Matiari, you will be greeted by the sounds of thumping of metal. This can be attributed to the fact that this village is famous for its brass and copper work. You can pick a few souvenirs for your folks here. This will be followed by returning to the ship and departing to Murshidabad.

In the morning, horse carts transport you to Katra Mosque, Murshidabad’s oldest mosque. It was built by Nawab Murshid Quli Khan. This will be followed by a trip to the Hazarduari Palace, built during the reign of Nawab Nazim Humayun Jah in the Greek “Doric” style. Facing an Imambara, it houses a wide collection of antiques. We then sail to Kalna.

We begin the day with a refreshing rickshaw ride through the lanes of Kalna. Offer prayers at Rajbari Temple Complex -Pratapeshwar and eight slope-roofed Nabakailas - which borrow elements from mosques. After this, we board the ship and moor for the night.

Disembark the ship after breakfast. Depart for the airport or your onward destination.

IMPORTANT NOTE: The itinerary maybe readjusted due to local conditions and days of the week, in order to avoid closure of monuments/museums. Last minute sailing adjustments may also occur. The schedule may shift due to the weather or to take advantage of unexpected opportunities. The exact time for each activity will be announced or posted by the onboard tour staff.